Mesa loses against the Southwestern Jaguars 79-64 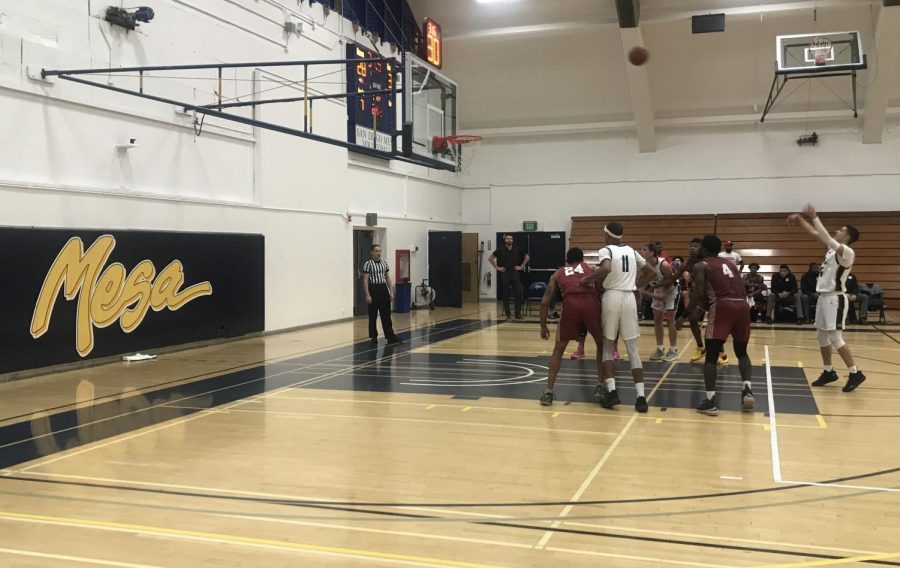 San Diego Mesa College men’s basketball went up against Southwestern Community College on Friday, Feb. 22 and lost 79-64. Both teams played with vigorous determination but only one brought home the win.

Mesa forward Cameron Hill brought in the most points, a total of 17 with 30 minutes of playing time and 10 rebounds. Forward Adrian Lee attempted eight field goals and made five of them. With 24 minutes of playtime Lee made a total of 14 points.

For the Jaguars, guard Marquavian Stephens brought in 22 points and played for 36 minutes, longer than any other player. Guard Marc Combs attempted 10 field goals and made five of them. Combs brought in 15 points for Southwestern.

Throughout the game the crowd shouted at the refs for what they thought was bad officiating. Fans on Southwestern’s side kept yelling “You’re a scrub!” to Mesa’s players.

At the end of the first half the score was 37-28 with Mesa behind. An hour into the game the teams huddled together for halftime to figure out their strategies.

After halftime, Mesa attempted a comeback, with Southwestern ahead 37-32, but Southwestern quickly upped their score.

When the countdown hit 13 minutes in the second half, guard Josh Johnson brought Mesas score up to 45 points. For the better part of the game Southwestern chanted at Mesa from their bench when Mesa had the ball.

After the team returned from their second timeout, Hill brought Mesa’s score up to 51, then again up to 53 against Southwestern’s 56. The score grew painfully close to a tie but Southwestern upped their points again.

Guard Jorge Ramirez fumbled with the ball and the opposing team grabbed it and brought it back to their side of the court.

Lee scored two points and guard Joseph Davis scored one point after technical foul throws, bringing the score to 58-56 with Mesa still behind. It was the closest Mesa came to catching up to Southwestern.

With one minute and twenty three seconds left on the clock they called another time-out. After Mesa rejoined the court, some of the players’ fists went up in the air. They were ready to bring their A-game.

When there was only one minute left, the score at 77-64, Southwestern was granted another free throw, bringing the game to its final score of 79-64. When the clock hit 40 seconds, Southwestern’s guard Quincy Ferebee dribbled the ball without any attempt of interference from Mesa until the buzzer ended the game.

The 2018-19 basketball season has come to end but the seasons playoffs are ongoing.