Love at first spike: Harris excited for her future with volleyball 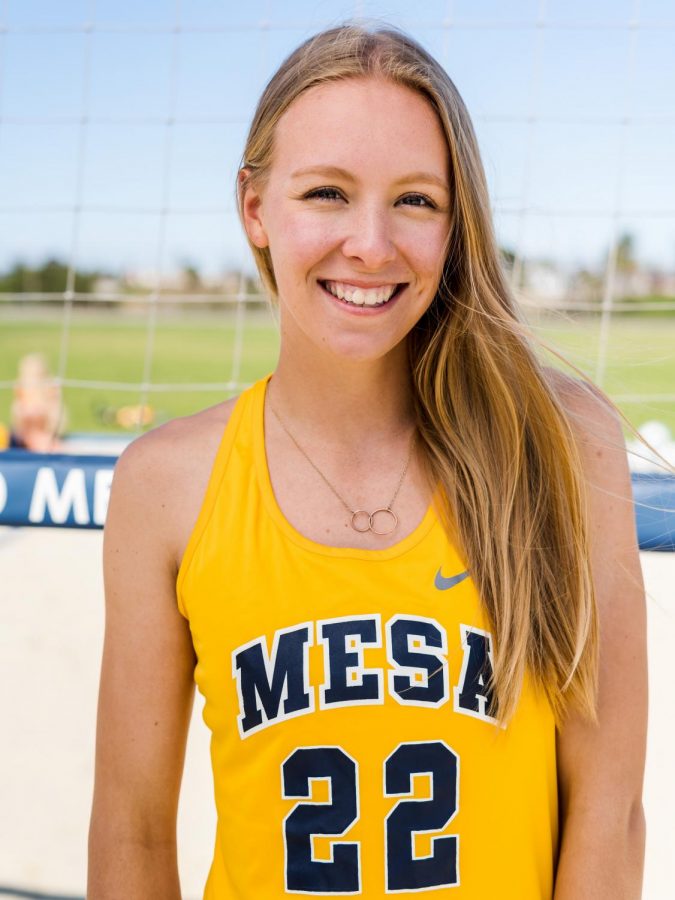 Madelyn Harris is a sophomore volleyball player for the Olympians

Playing volleyball from when she was only six years old, Madelyn Harris has been an influential member of the San Diego Mesa Women’s Volleyball team. Last year the team was a dominant force in the Pacific Coast Athletic ConferenceMes, where Harris helped in the efforts to win a league title and move onto the second round of state playoffs.

When reminiscing on her freshman year she explains, “My favorite memory at Mesa would probably be the small things like getting to eat breakfast or lunch with my teammates. The games were also really fun, and I have to say winning the conference was very rewarding for all of our hard work.”

Being in an all-conference selection in 2019, Harris was set to flourish in her sophomore season, however, the current situation of season cancellations due to COVID-19 has put that on pause. The California Community College Athletic Association has created a contingency plan which moves all 2020-2021 athletic seasons to the spring. Hopeful to bring back athletics in the the CCCAA stated, “The return to athletics in January will only occur if it is safe to do so, a decision that will be guided primarily by state and local health guidelines.”

This left Harris in a challenging position as the possibility of a season in the spring is still up in the air. “Quarantine has been a struggle for me because a lot of my life has changed. I was at home a lot more than I ever really had been. I was so used to being busy all the time, that at the beginning having a break was nice, but eventually I really started to miss work, my sport and school,” said Harris.

It can be difficult to stay positive for athletes like Harris, especially with stressors such as school, living back home, and being without the structure of college sports. When asked about how she stays motivated, she refers to the support of her boyfriend and sister. “…They always give me a reality check that this isn’t going to last forever, so I still need to prepare for my future.” she added.

Harris is consistent in preparing for her upcoming season, whenever it may be, and ready to get back to normal. “I am honestly really excited to just be with my teammates and be getting in a good consistent workout. I love doing stuff with my teammates and I have really been missing having an excuse free motivation for staying healthy,” noted Harris.

Her driving force is to earn a scholarship to play volleyball at a four-year university. Although upset with the current situation, she mentions how last year was encouraging for her pursuit to play volleyball at the next level. Harris relates how last season left herself and her beach volleyball partner, Hailey Henderson, feeling happy with the progress made. “It was both of our first times playing beach like this on a very organized team, and we were really just starting to refine our skills and get over the hump of being beginners,” said Harris.

With that in mind, Harris is definitely looking forward to her future. “I really want to transfer out of Mesa to keep playing. Quarantine has most likely pushed that plan back by a year, but hopefully this next year, or the one after I will be playing volleyball somewhere in Southern California or Hawaii.” No matter what gets in the way, volleyball will  definitely be in Harris’ future.