Ravelo prepared to dominate season with teammates at her side 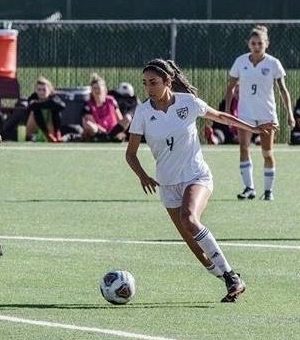 Ravelo dribbing the ball down field ready to make a goal.

When someone starts a hobby at the age of six, it’s no question that after 13 years they are pretty good at what they do. In Arianna Ravelo’s case, it is no different. She is a sophomore this year, playing forward for San Diego Mesa College’s women’s soccer.

Soccer for Ravelo, is everything. She said, “I love the intensity of the game and how soccer brings everyone together. I also really like how there’s so much space for creativity whether that be in team plays, or simply with the ball. There’s nearly no limit to that, especially when you are having fun.”

She has been playing for a long time, obviously, and that comes from her energetic personality, always ready to dive into new things. “Growing up I was always an energetic kid so I think after observing the game it looked really fun to me so I knew it was something I definitely wanted to try out,” said Ravelo.

Her skills speak for themselves. According to the Mesa athletics website, last season [2019-2020] for the Olympians, Ravelo played in 22 games, scored 11 goals with a 1.2 shot percentage, and dished out two assists. She also scored a game winning goal!

Ravelo has loved her time at Mesa. She mentioned, “My experience at Mesa has probably been the best I’ve had out of all the programs I’ve been a part of my whole soccer career. I’ve never been with a team whose bond is so strong, both on and off the field, and even the coaches. I believe we were so successful last season because of it and I’m praying this upcoming season is no different!”

Getting her teammates involved means both on and off the field. “If we’re not on campus socializing or training together on the field, there is always an event planned, soccer-related or not, to see the girls and stay in touch. Even on a regular basis, the girls and I contact each other through messages and FaceTime. We are always keeping each other updated on what goes on in our lives,” noted Ravelo.

Ravelo’s teammates feel the same way and have a high regard for her. Sophomore midfielder, Maleea Schlager, has a lot of great memories with Ravelo. “There are so many [great memories] it’s hard to choose! If I had to choose though, it would have to be all the times that we drove to away games because we basically spent the whole ride laughing, and she has the best laugh, it’s so contagious,” said Schlager.

Schlager added, “Arianna is probably one of the most kind, amazing, generous, hardworking, and fierce people I know. She has a very strong sense of morality and is never afraid to stand up for herself and her teammates.”

Another one of Ravelo’s teammates, Sophomore midfielder Elena Jaramillo echoed what Schlager said. “Soccer is such a team sport so it was very important that Arianna was able to work well with the rest of the team. Arianna is a very talented player, but she never got caught up in the spotlight. She always gives it her all, which made her one of our most dangerous players,” said Jaramillo.

In regards to the future, Ravelo doesn’t know what it holds. “As of now I do not have any division one scholarships, but I would love to continue playing for either San Diego State or UCLA,” added Ravelo. Jaramillo noted, “Hopefully Arianna continues to play for the rest of her college career. She is such a talented and impactful player. I think she could be one, if not the lead scorer this upcoming season.” Whatever Ravelo decides to do, one thing is for sure: her friends and teammates will have her back.