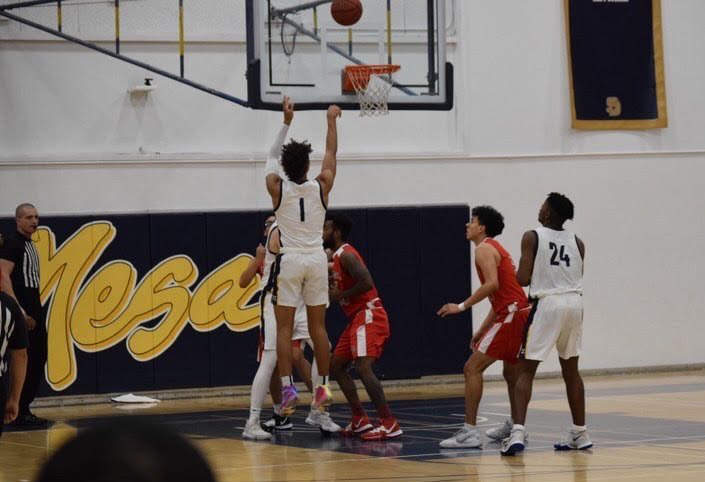 Most players who were on the team last season will be returning, to make a deep squad.

Due to COVID-19 restrictions, the San Diego Mesa Men’s Basketball team did not have a 2021 season, however, the team has found a way to stay positive, persevere, and get ready for the next opportunity.

“I think the best thing we can get from not having a season this year is actually having nearly a whole year to get in shape and tighten up those weaknesses that we lacked individually. Obviously, the negative side is we don’t get to play at all [regular season games],” said Sophomore guard Jahloni Mitchell.

“I am in fact still playing and keeping myself in shape,” he continued, “there are not too many gyms that are open at the moment, but I definitely try to get some work in when and wherever I can.”

Mitchell isn’t the only one who’s staying on course. Sophomore guard Javen Woodall said, “I’m always working out preparing for the [next] season. I  am always getting better and stronger each and every day. The way I see it, it’s an extra long offseason.”

As far as recruiting goes, it has been all over the place. “The pandemic messed up the recruiting process so we are having some sophomores return, so we should have a talented and deep squad for next season,” added Woodall.

Men’s Basketball Head Coach Travis Nichols said, “One disappointment was not allowing our sophomores to play this season which would have helped them with recruitment to a four year university. We were able to keep some really good recruits which is a positive.”

Nichols has been nothing but supportive for his team. “Right now I would make sure mentally they are ready, then physically,” he continued. “You can’t rush players back after something like this. My first words to them if we were together would include asking if everyone is doing alright. They are still training but taking precautions to be safe. A lot of our players are able to workout at home and we hold zoom meetings helping them with their training.”

Obviously, in the midst of everything, staying healthy is a big priority. “The player’s overall health is my main worry,” Nicholas noted. “When the administration gives us the green light to safely return to campus we will be there. My focus is making sure my players and coaches feel safe, and that we follow the guidelines given to us to remain safe. Like the players, I can’t wait to get back on campus, but safety is the main concern.”

The freshmen are ready to take on any challenges ahead. Freshman guard Sean Smith said, “Our coaches tell us to stay ready, so we will. We have zoom meetings with the team so chemistry is there. Next season is going to be fun when it gets here.”

Speaking of chemistry, every team needs it, but not every team has it. “I don’t think team chemistry has been affected at all,” said Mitchell. He was echoed by his teammates, with both Smith and Woodall saying team chemistry is as strong as it’s been.

Nichols added positively, “As a coaching staff we are making sure our guys are focused on their academics which will lead to them being ready for the season. If you don’t have the grades you can’t play. We will be ready.”