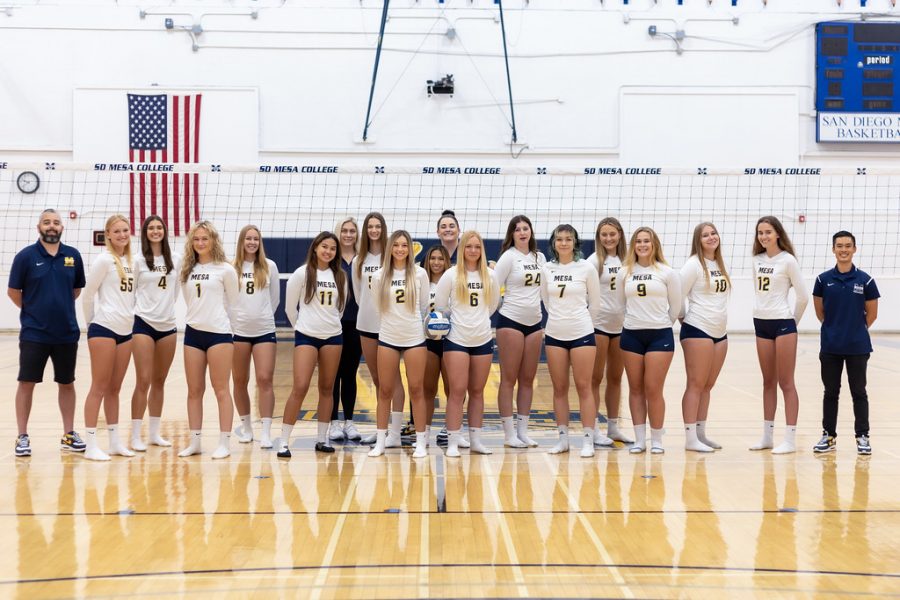 The Women's Volleyball team for the 2021 season. So far, winning over 10 games and looking ready to dominate the playoffs.

As the fall 2021 season progresses, the San Diego Mesa College Women’s Volleyball team has garnered a record of 11-4, taking down opponents with no sign of slowing down.

The Olympians, who have just under 10 games left in the season, made a statement with their 3-1 victory over MiraCosta, giving them win number 12. Head Coach Bobbie Jo Stall has been very impressed with her team after going 9-2 in the month of September, noting “We have a very talented group of ladies that have a lot of potential. When everyone is connecting and working together, we have some very good volleyball being displayed. We scheduled a tough pre-season which ultimately made us better for the long haul.”

As the second half of the season continues, Stall wants the team to stay focused. She said one thing they need to focus on is “Consistency, staying healthy and having some fire to push to the end of the season.” During the earlier stretch of the season, Stall noticed that her team was doing extremely well in several areas, saying “We have definitely improved as servers as well as defenders. We are working on establishing trust between players so we can connect and run a smooth offense.”

The players themselves are proud of where they have gotten to so far. Sophomore hitter Sophia Jarosz said, “Our season has been pretty good so far. We had a fun preseason and I’m excited to continue playing and continue improving as a team.” Team chemistry has been top notch for the team as well. Jarosz mentioned, “I think our team has learned to play together and we have definitely been improving as the season progresses. Especially from our preseason games, everyone has stepped up individually and showed what they are capable of. We’ve had some great moments on the court, but overall our wins have come from playing as a team, having solid serve receives, good defense and making strong offensive plays. Being able to trust one another and having good communication is key.”

Jarosz’s teammate, Sophomore blocker Isabelle Bakken has been grateful for the coaching staff this season, and what they have taught her, and the whole team. “Our coaches are so amazing, of course, coaching volleyball and making us better but also teaching us how to be good people and teammates. Without them we wouldn’t be close to as successful. One thing we always say is ‘hold the rope.’ It means who can you trust to hold the end of a rope you are falling from. We should be able to trust everyone on our team, through all the bad, good, blood, the sweat and tears, at the end of the day we are still there to hold the rope.”

Bakken, who won California Community College Women’s Volleyball Association (CCCWVCA) State Player of the Week in early September, has been vital to the squad this season. She said, “Our team has improved so much to get all out wins. We have so much talent on our team but we have known from the beginning our mental toughness will lead us to success.”

“The next step for our team is getting to and winning the state championship. We all want it and we know we have the ability to achieve it. We just have to keep grinding and envisioning that as our end goal,” said Jarosz. As far as the playoffs are concerned, Stall is ready for the action. She said, “When you enter the playoffs, all of the teams that make it are good and can play well. Especially with what we’ve seen this year, anyone can beat anyone. The biggest message, if you want to be special and go the distance, is to stay focused, play with confidence and have more of a desire to win than the teams you play against.”