Smith leading the way in Olympians’ solid start to season 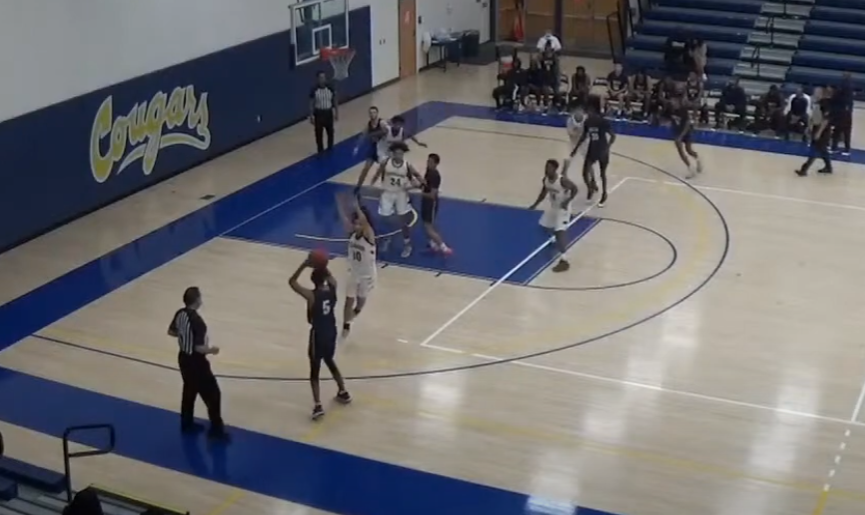 Sean Smith (#5, Blue) takes a 3 pointer during San Diego Mesa's game against College of the Canyons.

Freshman Sean Smith has been providing a spark for the Mesa men’s basketball team so far, giving the Olympians a fantastic 4-2 start to the 2021-22 season.

Of the six games Smith started this season, he has averaged 13.3 points per game, 5.2 rebounds per game, and 5.2 assists per game, not to mention a great defensive stat line of 2.8 steals per game, and 1 block per game. Those numbers are all team highs with the exception of rebounds, where he ranks second on the team behind forward William Bailey.

Head Coach Travis Nichols couldn’t be more pleased with Smith’s production. “Sean is a tremendous talent, and right now what we are seeing is his natural talent. Once he understands the college game a bit more he is going to go from a good player, which he is now, to a great player,” Nichols said. “He is a cool, calm, and collected player. His energy is his confidence. He is not a guy that gets in your face, or a ‘get you hyped’ type of player, but he leads by example which is great.” Nichols added, “I believe [Smith] can be one of the best guards to come out of San Diego Mesa College. He is in control of his destiny. As a coach I’m never worried about the basketball aspect with any of my players, Sean included.”

Smith, like any player, has to find his inspiration from somewhere. He mentioned, “What motivates me to become better is looking up to the professional players and seeing myself playing with, or against them. Also just the lifestyle and making my family proud.” He added, “Mesa has shaped me into the athlete I am today, because they allow me to be ‘me’. We have a good team and I’m surrounded by great coaches who care about us and push us to be better.”

While Smith has been shining this season, he never forgets his teammates, and helps them be in the spotlight as well. “I feel like I’m playing well, but things could be way better. That comes just by watching game film and correcting my mistakes. I try to put my teammates in the best situation to make a play on the floor and when I’m not on the floor, just cheering and being there for them.” Smith hasn’t taken anything for granted this year, and enjoyed every game in the process. He said, “Just being able to practice, play in games, and have the teammates that I have this year has been my favorite. As the season continues, I’m going to maintain my efficiency, continue to be me, and do my job.”

Teammate Jahloni Mitchell said, “Sean is a great player all around and he knows his role pretty well. He knows how to get the players around him going, and he knows when to turn it on for himself as well. He doesn’t look to score right away. He knows how to get others involved first, that way it opens up better opportunities for himself as the game flows.”

After almost two years of not having games, Mitchell and Smith were able to gel and develop great chemistry going into this season, so it’s safe to say Mitchell knows his teammate’s game well. “With me and Sean being captains of the team, his role as an individual is to be the point guard and be a voice on the floor. My favorite moment this season thus far has to be the pass he gave me to hit the game winner against Cyprus,” noted Mitchell.

Nichols noted that the team’s overall talent is what is helping propel them to their 4-2 start, but there’s more to it than that.

“Talent alone does not lead to a successful season in our conference. I am proud of what we have achieved thus far, but we have a lot of work to do to be able to have more success. The court is just like the classroom, we are always studying, and reviewing to prepare for the big test which is the game. At times our study habits, chemistry, are not aligned which leads to a failure to perform at the level we need our players to perform. As a staff we are working diligently to make sure our players are properly prepared so they can maintain good chemistry. If this team does what is needed in the classroom and on the court we will be fighting for a conference title with Sean leading the way.”