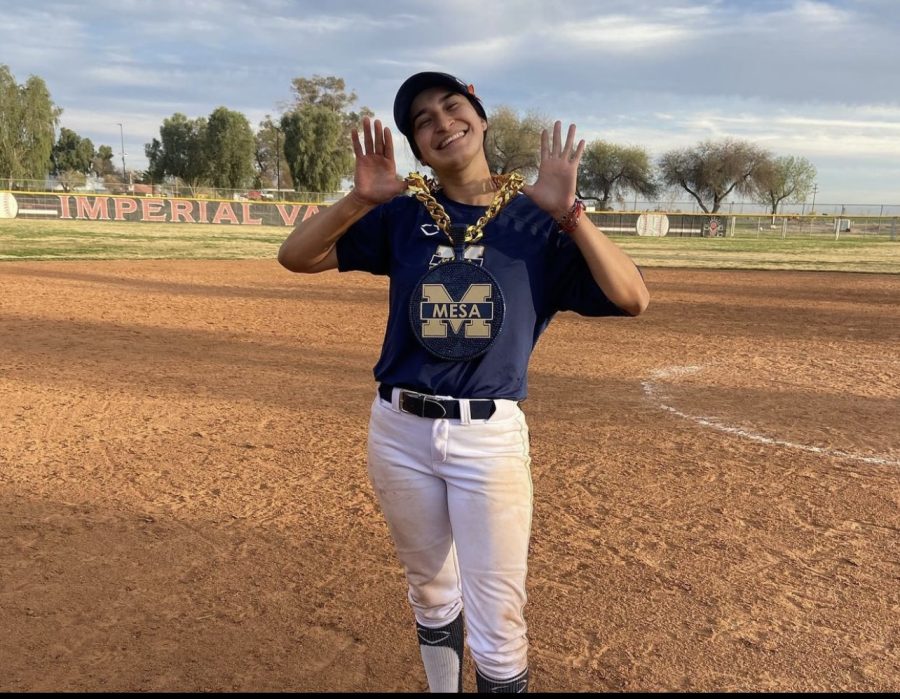 Arianna Izaguirre herself posing for a picture after a game.

A student-athlete who has been standing up on the diamond and sitting hitters down this season after two canceled seasons, Sophomore pitcher Arianna Izaguirre has been pitching lights out for the San Diego Mesa softball team this year, while also facing the challenges of learning a new position, living on her own, and motivating her teammates into success.

Izaguirre is one of three San Diego Mesa softball players who played on the team in 2019 and 2020 in which both of those seasons got canceled. Izaguirre said, “Some of us really want it because we had those two years taken away from us and some players may be on a cruise because they maybe do not understand what it is like to lose something you love. It is hard having some people looking ahead and some people relaxed, it’s a little bit difficult but we are seeing that they do want to be here, and they do love it. It is good to see everyone have that same love for the sport.”

That love for the sport is something that Izaguirre also gave her insight on, saying, “I started playing at the age of four. I’ve always loved it. I think it is because my brothers’ played sports, so I wanted to try something too and I tried soccer but didn’t like it. I tried volleyball and I was ok at it but with softball, I just had that love for it because on the field I am something else and it was just tunnel vision from there.” Izaguirre is not lying when she says she is something else on that field, in 88.2 innings pitched Izaguirre has racked up an impressive 39 strikeouts along with posting a 1.97 ERA pushing the San Diego Mesa softball team towards success.

With every sport, there is success and hardship, out of that hardship there are lessons that can be learned and Izaguirre shared a lesson she has learned through softball, Izaguirre said, “A lesson softball has taught me is time management and to really focus on what I am trying to get to. I have to organize my days right, now that I am living on my own it has really taught me a lot. I have to feed myself; I have to wash the clothes I am going to practice in, and then I have to worry about school and setting time aside for homework. Then I come here to practice but when I am at practice I kind of forget about all of that time management. That one is a huge one and then focus on what I need to get to next as a pitcher, I never started as a pitcher but when I got here to Mesa College, I realized it is going to help my team out so let’s do it might as well. Focusing on each and every pitch and getting that strike where I need it to has gotten me to focus on a lot of little things in life, like all right, I have to do it one step at a time I have to look at one main thing and get to that first before I go anywhere else.”

Izaguirre was also a main piece in San Diego Mesa’s big win over previous state champion Fullerton College earlier in the season holding them to only one run in a 2-1 victory. Going into that game Izaguirre said, “I am not going to lie I was really nervous going into that game but I was excited as well because I used to talk to the Fullerton coach we were really good at communicating but I did not do my part in reaching back so seeing them again on the field was like all right, let’s show her what I can actually do and what she may have missed. So, I was really motivated yet nervous, but I was super excited to just be out there and show what I can do.” After the win, Izaguirre explained when the nerves went away and reality set it, “I cried because I was so excited with myself. I was so proud of myself, I was like wow you really did that, you do not pitch a lot but went up there and just shut them down. I was like go Ari!”

With her success at San Diego Mesa on the field, Izaguirre was asked what her next steps are when she is finished at the school to which Izaguirre responded, “I do plan on staying in San Diego. Hopefully softball I can get to the next level. If not, that’s okay. I really do want to work with children. I want to be a science teacher I think that would be fun and pretty cool.” San Diego Mesa softball is 10-8-1 hoping to make a push towards playoffs this year and with Izaguirre, in the circle, they have a very good chance at achieving that.