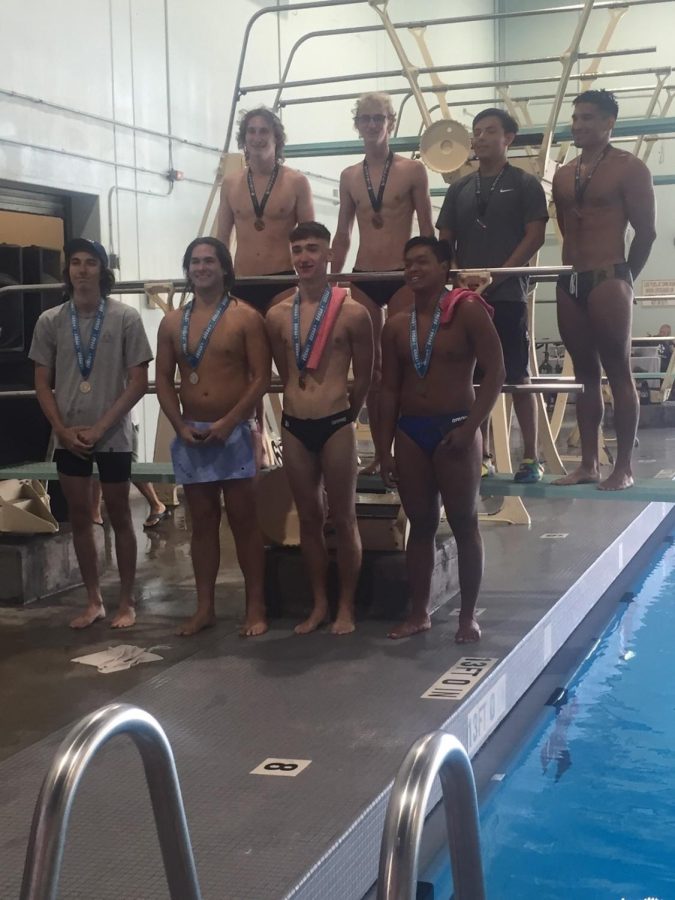 Ty Hunt back row-left and Filip Dominique back row second from left posing for a picture after placing at CCCAA State Swimming and Diving Championship.

Spring sports are coming to an end at San Diego Mesa College and there have been some great Achievements and other things that did not go teams’ way to end the season. In this roundup, both of these things will be discussed, certain athletes will be mentioned for their achievements, and the records for each team who participated in spring will be shown as well.

Starting off with the men’s CCCAA State Swimming & Diving Championships for the Mesa College Olympians, the men’s 3-meter diving final result was Ty Hunt finishing in 5th place and Filip Dominique finishing in 6thplace. Both of these Olympian Athletes received All-American honors with their top-8 finishes making their outing representing the school and themselves very impressive.

Mesa Beach Volleyball was also impressive this spring finishing with a record of 18-5 and finishing the season as Pacific Coast Athletic Conference Champs. Mesa Beach volleyball sadly came to an end after making a fantastic state championship run, the first state championship runs for the team since the program begin in 2015, overall, Mesa women’s beach volleyball finished the season ranked top 6 in the state which is an amazing achievement itself.

Men’s track and field was also very impressive this season finishing 2nd at the SoCal regionals. Mesa men’s track and field has a long list of student-athletes that qualified for state, and you are able to view this list on the San Diego Mesa sports website. Having that many athletes qualify for state lets the program speak for itself.

Mesa Men’s volleyball ended the season with a record of 8-14 with their final game being a 3-0 loss to Long Beach City College. Even though they did not have the season they were hoping for, San Diego Mesa men’s volleyball has the talent to come back even stronger next season.

Mesa baseball finished the season at 10-29 dropping their final game to Palomar 6-0, Mesa baseball season did not go the way they wanted it to but there is some light at the end of the tunnel. Utility player Andrew Gauna and Outfielder Danny Yanez both received first-team all-PCAC honors showing that the Mesa baseball team is in good hands going into the future.

Mesa softball finished the season being ranked top 20 in the state but unfortunately, that was not enough to propel them into the playoffs as they finished the season with an overall record of 14-18-1, the Olympian softball team did end the season on a good note by securing a win against Southwestern with a final score of 9-6. Mesa softball was freshmen heavy this year giving them positive upside for upcoming years within the program.

Last but not least we have Mesa Women’s badminton a team that finished the year with a record of 2-6 but had a bright spot within their team. Garcia Badaracco was the 2022 SCC singles champion and qualified for state in doing so.  Esther Ngo placed 6th in singles and Mesa’s doubles, Erica Garcia Badaracco and Esther Ngo, placed 4th which allowed them to qualify for state in both those aspects as well.

Spring Sports are coming to end at San Diego Mesa and things are going to ramp up soon for the fall, congratulations to all the teams that competed this spring and to all those who received personal and/or team achievements.