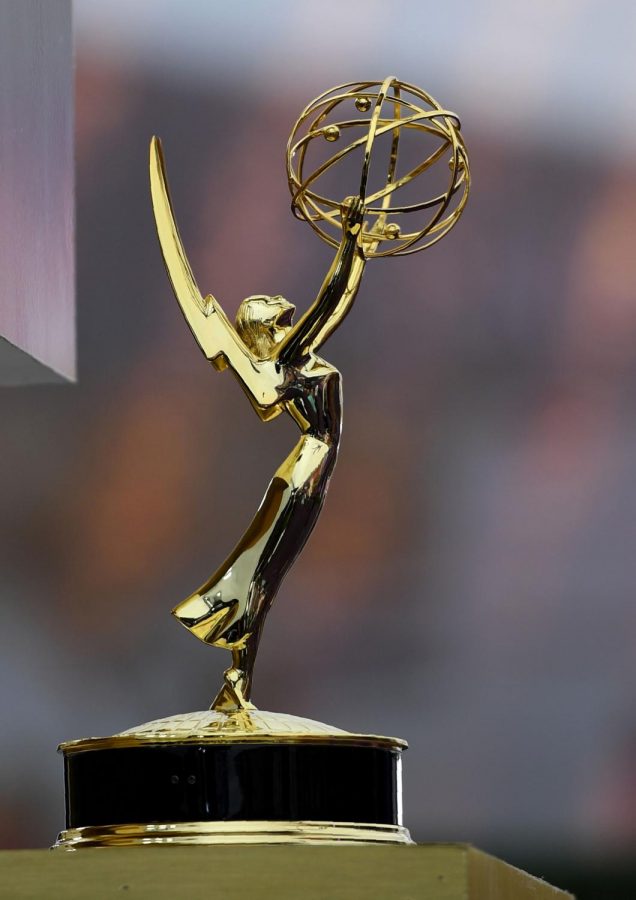 Up close with an Emmy award

The 2020 Emmys turned in its glamorous red carpet for interns in hazmat suits, per social distancing rules. Jimmy Kimmel hosted an empty Staples Center while celebrities got dressed up and celebrated their wins at home, making for a very strange but fitting start to the awards show season. Even as television and film had to take a back seat this year, the Emmys were a great reminder of how the entertainment industry has held up and can continue to bring people together.

The Emmys really stepped it up this year, providing a show that felt intimate to its audience. Celebrities accepted their awards in their homes alongside family and friends, taking away from some of the artificialiaties of a stage and blinding lights. Not only did this resonate with the audience who is also staying home and practicing social distancing, but it created a feeling of relatability not usually found within awards shows.

Kimmel’s opening monologue was standard in award show humor. Apart from the cheesy pop culture references and plethora of quarantine jokes, Kimmel overall proved to be inventive with keeping the show interesting. The three-time Emmy host explained that producers took multiple health precautions to ensure safety, and even cracked jokes about the rather eerie noise of applause recycled from past Emmy shows.

The scene of Kimmel with a giant screen of video calls from nominees felt like the best representation of what this year’s award show season would look like. Producers got creative to ensure an entertaining show and were able to incorporate zoom calls with celebrities, special guests to join Kimmel, and celebrity cardboard cutouts to fill a rather lonely Staples Center.

The winners of the night? The hit Canadian show and the cast of “Schitt’s Creek”. It was a bittersweet moment for the cast, whose show ran from 2015-2020 and swept all of the comedy section awards, the first show to do so in Emmys history. Actors Dan Levy, Eugene Levy, Annie Murphy, and Catherine O’Hara and the rest of the cast celebrated in true 2020 fashion with a socially distanced party.

Zendaya was also another big winner that night ending what would have been “Succession’s” sweep with her win for Outstanding Drama Actress for her role as Rue in “Euphoria.” Zendaya became the youngest actress to ever win the award and brought the HBO show some well-deserved recognition.

Other winners included  “Watchmen” which also had multiple wins that night including Regina King and Yahya Abdul Mateen-Ⅱ who won Outstanding Lead Actress and Outstanding Supporting Actor in the Limited Series category. For a full list of winners and nominees click here.

Even those who were nominated but did not win awards were greeted with an intern in a hazmat suit, bringing the Emmy to sorely show it off and wave goodbye. All of these small intricacies that the show provided created a feeling of making the most of the situation at hand with a laugh.

The current COVID-19 pandemic tried but failed to put a damper on award show season, and the Emmys embraced a socially distanced awards show and provided a perfect example for other awards ceremonies to follow.