Men’s Water Polo gearing up for a proposed spring season 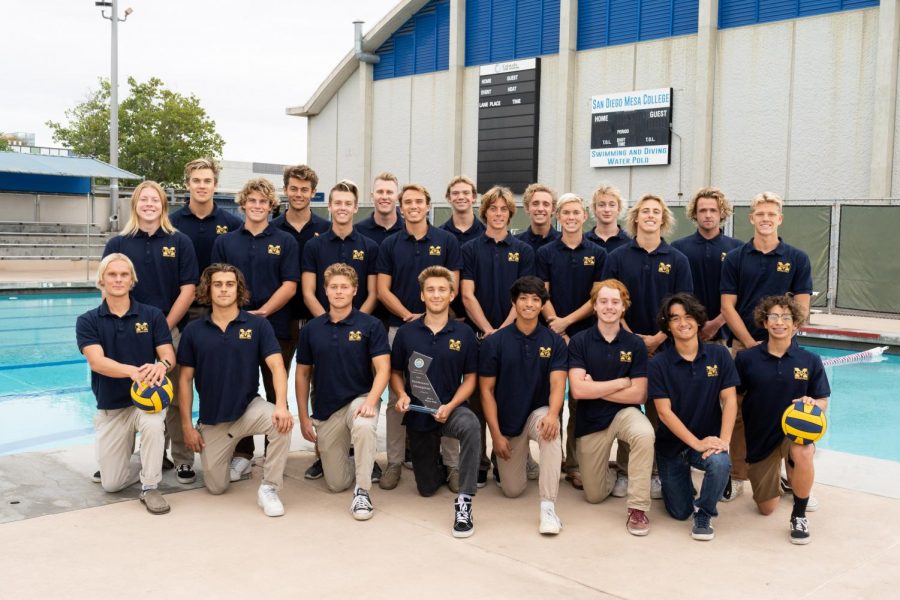 Mesa's Men's Water Polo together for a photo after winning the PCAC championship last year.

The San Diego Mesa College men’s water polo team has been able to practice and train in other ways, hopefully getting ready for a spring season.

Head Coach Nathan Resch said of an official spring season, “It is in draft form at this point. We are still waiting to see how things proceed with our return to campus.”

Even though the season is not confirmed, they are hoping for the best, and still training. “The difference from what we usually do is the daunting challenge of limited pool access, and, like other Mesa classes, we do not have in person meetings. As I mentioned, we have made individual conditioning a focus keeping up with aerobic conditioning, and maintaining strength. The team has found some creative ways to stay in shape on dry land, and, even in the ocean,” said Resch.

He added, “At this point we will be happy to get on campus together when it is safe to do so. The conference has asked us to play more local Pacific Coast Athletic Conference games which takes up most of our schedule.”

Sophomore driver Jackson Cassidy mentioned, “Coach Resch and Coach Beto have maintained a positive outlook on the season and have been very helpful to the entire team through the pandemic.” Cassidy also described how the regulations that pertained to COVID-19 have impacted the team. “The circumstances have most definitely affected team chemistry. Maintaining good chemistry has been one of the most important challenges. It’s been a lot harder to do any team bonding since gatherings are discouraged,” he said.

On the positive side, Cassidy believes there were things that helped the team as well. “Even though the situation and circumstances are not ideal, the effects of the pandemic are universal for everyone and I think going through such a difficult time together could create an even stronger team dynamic,” said Cassidy.

Fortunately, the boys have found ways to get some reps in. Sophomore driver Jake Rose said, “I am still playing water polo right now, I’m playing with my old club team to stay in shape in hopes for a season.” Rose added to what Cassidy explained, “We’re not able to be in the pool practicing as a team, building chemistry with the incoming freshman like we need to.” Luckily, that might not be the biggest problem. According to Rose, the difference between this season and last season is the overwhelming amount of sophomores, as well as the team’s size in general.

“I think the freshmen are very eager to play with this type of competition and level of play, I believe they haven’t seen it before and they are hopeful to step up and adapt,” said Rose. Cassidy added, “I think it has been extremely hard for the freshmen. Most of them are coming into this after experiencing an incomplete senior year. I think this will really show the character and dedication of our freshmen.”

Resch noted, “Our focus to this point has been individual conditioning, and, as always, academic success. We hope things improve on the COVID-19 front where we can get together and train as the next step. We all miss being at the pool together. One thing I always expect from our team is effort. We must always challenge ourselves and each other to work at the highest level possible, regardless of circumstance.

The goal is always to win a conference championship. We are the defending Pacific Coast Athletic Conference  champions, so, knowing that we are the team to beat means that other teams will be training harder with a focus on beating us. We need to train and push each other like champions,”  said Resch.