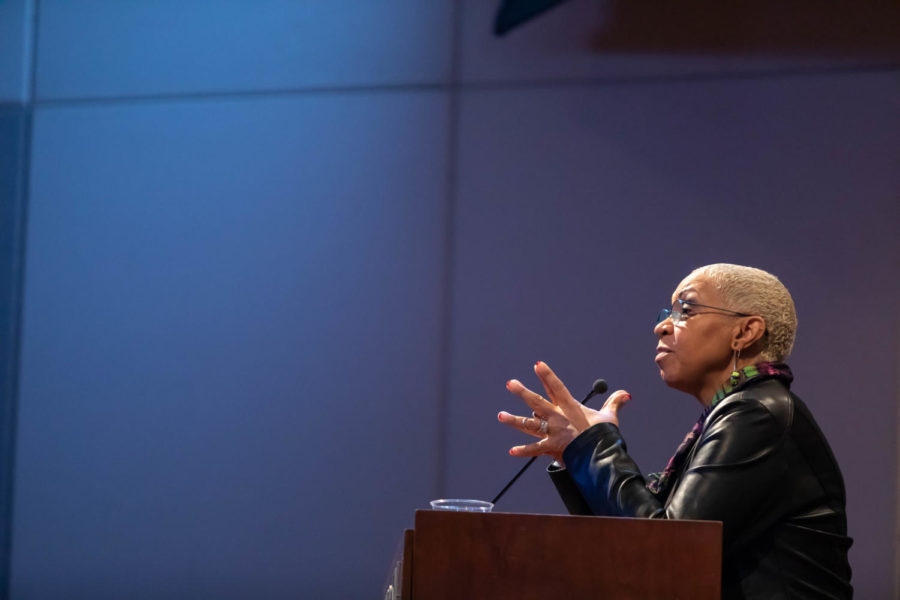 Dr. Joy A. DeGruy at the Be the Healing Conference at IIT Kent Law School in Chicago, Illinois on Tuesday, December 10, 2019.

On March 8, the SDCCD Campus Diversity Advisory Council hosted a virtual event as part of an extension of their Black History Month celebration.

The keynote speaker of the event was nationally and internationally renowned social researcher, author, and educator, Joy DeGruy. Her most recent book “Post Traumatic Slave Syndrome: America’s Legacy of Enduring Injury and Healing,” illustrates the psychological theory that Black people carry the emotional weight of their ancestors on their shoulders as they move through life while simultaneously being told the opposite.

“I believe that it’s the secrets that make us sick, and that America’s greatest pathology is her denial,” DeGruy said.

Through a discourse that spanned nearly 4 hours, DeGruy broke down the blatant atrocities and injustices that Black people have had to not only endure for over 400 years, but the multi-generational trauma that has manifested itself among people of color.

“In the current climate, it is apparent that many still do not fully comprehend the devastating impact (mental, health, and financial) that slavery still has on our country today,” the event headline stated.

With a series of images, personal accounts, and quotes from historical figures, DeGruy provided historical context to the traumas of marginalized groups, outlining the history of chattel slavery in the United States, and the course of events that followed the 13th Amendment.

The event served as an invitation to all who may desire to gain a more detailed perspective of how race plays into the lived experiences of Black people. More so, the presentation highlighted the many institutions through which racism is perpetuated throughout the country.

“What we have to appreciate is that the foundation of all of this is anti-blackness. In other words, if you get to it, everyone else is going to get taken care of,” DeGruy said.

The consequences of “Post Traumatic Slave Syndrome” were perhaps the most jarring of the entire presentation; DeGruy highlighted the dehumanization of Black people, leading to the persecution and wrongful deaths of many innocent Black lives, “too numerous to mention today.” This is perhaps nowhere more apparent than in the events which sparked last year’s BLM protests.

“We can philosophize if it’s in a book or if it’s a theory, but it’s hard to ignore when it’s in plain sight,” DeGruy said of the murder of George Floyd and the subsequent nationwide outrage the video produced.

Dr. DeGruy’s book is available for sale on her official website, as well as on Amazon.