The Mesa Press recap of the year spent in quarantine 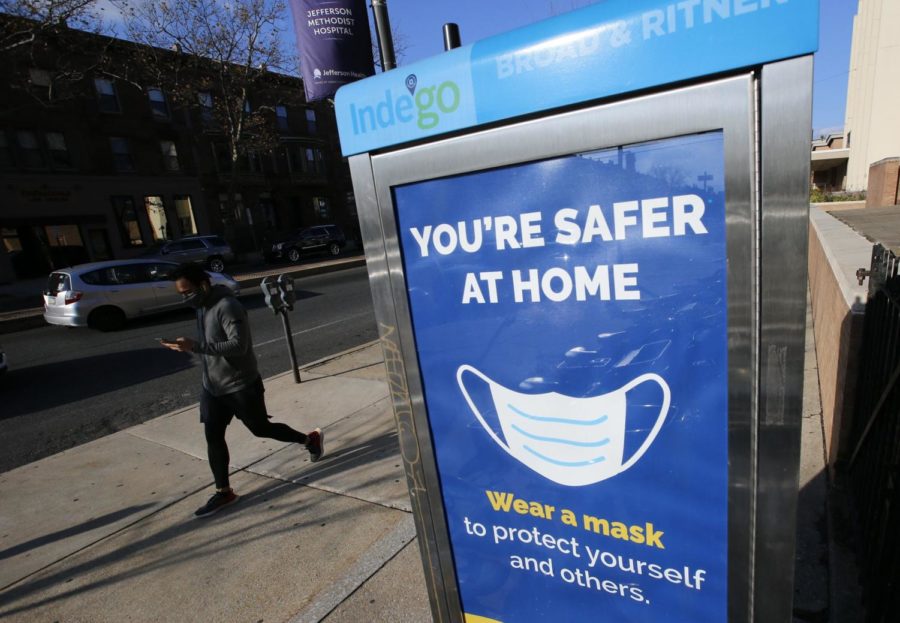 Americans have been ordered to wear masks in public since Apr. 3 2020

March 11, 2021, marks one year since the World Health Organization declared a global pandemic resulting from the novel coronavirus, “severe acute respiratory syndrome coronavirus 2 (SARS-CoV-2).” Now, over a year later, the United States has experienced around 535,000 deaths and 29 million cases related to the COVID-19 pandemic. While fighting the virus is an ongoing global battle, vaccine rollouts provide a glimmer of normalcy for the future of the United States and the world.

We have assembled a brief retrospective of the events which have come to define the United States during a year COVID-19 restrictions.

It all began on March 11, when the World Health Organization declared coronavirus a pandemic. March Madness, the NCAA basketball tournament was cancelled and the NBA suspended their respective season. On March 13, President Donald Trump declared a national emergency. Schools closed, sending millions of children and university students home. Two days later, on March 15, the Centers for Disease Control and Prevention, CDC, said Americans should cancel gatherings of 50 or more people for two months. The death toll began to rise and restaurants, airlines, movie theaters and malls all closed. New York began a daily community cheer at 7 p.m. to show their appreciation for healthcare workers in a socially distanced fashion.

A month later, on a state-by-state basis, Americans received stay-at-home orders and on April 3 were ordered by the CDC to wear masks in public to slow the spread of the virus. TikTok quickly emerged in social media stardom and gained 2 billion downloads on mobile devices, breaking previous records. On April 11, the U.S. surpassed Italy in COVID-19 caused deaths. Soon after Trump’s declaration of a national emergency, 22 million Americans applied for unemployment aid, breaking record numbers since the Great Depression.

When May rolled around, select states began to reopen from stay-at-home orders in hopes of picking up their individual economies. Memorial day weekend celebrations showed an immediate spike in coronavirus cases with the death toll surpassing 100,000 following the festivities. Also in May was the death of George Floyd, which spurred millions of Americans to take to the streets to protest police brutality. Further protests ensued throughout the summer.

As the summer continued, in June the United States hit a record number of COVID-19 cases in a day at 36,880. Following the death of George Floyd, Trump signed an executive order focusing on police reform. On June 18, the Supreme Court blocked the Trump administration from ending the Deferred Action for Arrivals Act, DACA, in a 5-4 decision.

Fourth of July celebrations continued despite the rising number of COVID-19 cases and Trump urged the CDC to relax their policy surrounding school reopenings. Taylor Swift dropped her surprise album, “Folklore,” on July 24. A study released by familiesusa.org, on July 13, shows that more than 5 million Americans had lost their health insurance since the start of the pandemic. On July 31, the death toll in the United States rose to almost 150,000. Companies Pfizer and Moderna released that they had begun phase three of their vaccine trials.

As the school year began in August, states were divided over sending students back to in-person classes. Former President Joe Biden announced Senator Kamala Harris as his running mate. Cardi B and Megan Thee Stallion released their collaboration, “WAP,” which charted No.1 on Billboard. Actor Chadwick Boseman, known for his role in “Black Panther,” died of cancer. The August Complex Fire, which began on Aug. 16, grew to destroy over 1 million acres in Northern California.

In October, the Lakers won their 17th NBA championship. Trump and his wife, first lady Melania Trump, both tested positive for COVID-19. Halloween activities were altered to accommodate COVID-19 protocols.

Biden and Harris won the 2020 presidential election in November. Harry Styles was the first ever solo male to grace the cover of Vogue. Pfizer and Moderna released their vaccine efficacy reports. Alex Trebek, longtime host of “Jeopardy,” died of cancer.

The death toll rose to 300,000 in December of 2020. A spike in COVID-19 cases after the holiday season was anticipated due to family gatherings. Former United States Attorney General William Barr announced his resignation from Trump’s legal team.

To ring in the New Year, The U.S. Capitol was infiltrated on Jan. 6 by pro-Trump extremists and white supremacists. The COVID-19 death toll passed 400,000. Biden was sworn in as the 46th president of the United States and Kamala Harris was sworn in as vice president, making history as the first woman, first Asian American and first Black person to fill the position.

In February, Texas faced a devastating winter snowstorm that caused 57 deaths. On Feb. 22, the COVID-19 death toll hit a landmark number of 500,000. The Tampa Bay Buccaneers won Super Bowl LV. A second Trump impeachment trial began in the aftermath of the Capitol riots. The Food and Drug Administration gave Johnson and Johnson’s COVID-19 vaccine Emergency Use Authorization, making it the first single-dose vaccine for the novel coronavirus to be released.

As March comes back around, music festivals such as Outside Lands and Life is Beautiful anticipate a comeback this fall, releasing their respective lineups. Beyonce won at the Grammy Awards — still participating in socially distanced fashion — making her the most awarded female artist in history with 28 wins. A number of people, eight in total, six of whom were women of Asian descent, were shot to death at three seperate massage parlors in Atlanta, GA; the suspect was arrested on a charge of eight counts of murder.

The COVID-19 pandemic dramatically altered social, economic and cultural life through 2020 and into 2021. As the United States continues its vaccination efforts, and although a return to “normal” life may be close, the fallout from COVID-19 remains to be anything but certain.