Leyva on “track” for success 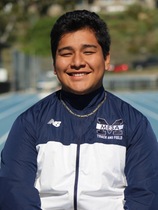 Track and Field, the age old sport of gladiators. Ever present, you can count on amazing athletes accomplishing the very best for their respective programs. Juan Leyva, junior Thrower for San Diego Mesa, can be put in that very same category.

Some people are born with athletic ability, others train for years to refine their craft. Sometimes, it’s both. Leyva appreciates the work he has put in over the years. “The great thing about throwing is that you are able to see the best in yourself and other people,” he said. “Mesa has taught me that in order to compete at your best you must be fully committed to your workouts and practices. Only trying half as hard won’t take you anywhere.”

Not only is he committed to working hard, but he also uplifts his teammates. “I motivate my teammates with small positive reinforcement. I want to be able to support their training habits but I also want them to be able to help themselves to become the best they can be,” Leyva remarked. His teammate, junior Thrower Meto Pula added, “Juan involves our teammates by making sure we are sticking to the process of our training and staying connected with us. He makes sure he maintains a good relationship with all the throwers.”

As a veteran on the team, you can expect that from him. “I have been throwing since I was a freshman in high school,” noted Leyva. “My end goal is to transfer with some sort of scholarship while also helping my teammates

become better athletes. Whether it’s a division 1 or  a division 2 school, I would like to transfer to a school that I can  help out in any way possible.”

“Juan’s best attribute is definitely that he doesn’t give up or bring himself  down whenever he’s having an off day in work outs. He always tries to keep a positive attitude while throwing and overall training,” said Pula. Leyva’s dedication to his team continues on the field, but off the field as well. Pula remised, “Honestly I have lots of great memories with Juan, I have known him for about eight years. He’s one of my closest friends. He was the one to encourage me to join the Mesa Track and Field team, and try out for the hammer event. At the time I had no experience throwing hammer, despite throwing shot put and discus in high school. It was because of him that I was able to find a new passion that wasn’t there before.”

Sophomore Thrower Andrew Bayot praised Leyva’s all around attitude as well. “He is really friendly with everyone and is a great teammate. Juan always tries his best to give solid advice and is a good friend. Juan has always helped make the new players feel more welcomed with his nice demeanor,” said Bayot.

He added, “Juan was a big supporter for me to keep doing track. We also went to the same high school and built our friendship there. He would always give me advice when I needed it.”

Track and Field Head Coach Sean Ricketts praised Leyva as well. “Juan has demonstrated growth and development as a student athlete over the last couple of years. He has not only become more dedicated and committed to Throwing and his training, but also his academics.  During the pandemic, he took a leadership role and helped coordinate training sessions at different locations for him and his teammates to practice on their own at,” he said.

Whatever Leyva has in store, you can count on him being successful, whether he’s on the field throwing, or off the field supporting his teammates. “I think Juan will continue to work on getting better over the years as he continues to advance in not only the hammer throwing event, but in his life and future career as well,” said Pula. As far as his teammates and friends are concerned, Juan is on the track for success.