Men’s basketball team gets the whistle blown on them 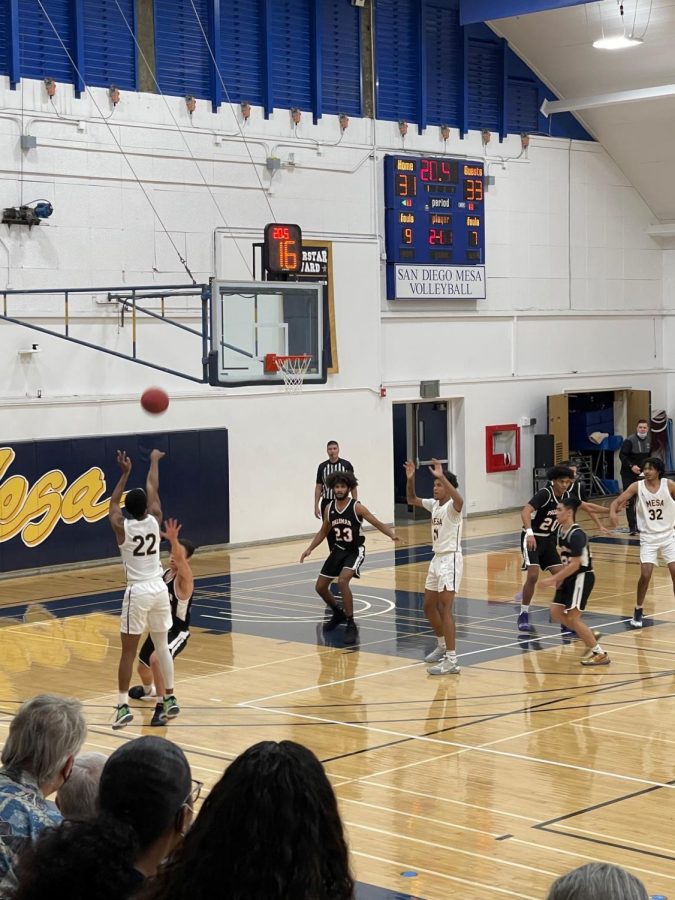 With the season coming close to the end with only 5 games left to play the team has been working harder with the hopes of an even better season-ending story. Wednesday night’s basketball game could have been celebrated in victory by our Olympian players if it had not been for a few bad calls that were obviously made by the referee that were blatantly pointed out by fans in the stands.

One referee called a foul during the first quarter that rattled the crowd when #11 William Bailey went up for a layup and was fouled in mid-air and had to take out the ball without receiving his and 1. Another foul that had the crowd on their feet was when #33 Jamaal Wright was hanging on to a rebound and got the whistle blown on him instead of a Palomar player who should have had the whistle blown on them instead of a reaching foul.

We suffered yet another loss by only 5 points to Palomar with a final score of 64-59. The Team was beginning their pre-game rituals when they were asked for a few words before the game. Team captains: #12- Craig “CJ” Jackson, #11- William “Will” Bailey, #5-Sean Smith, and #30- Emanuel “E” Henry. These players were asked how they felt the team was going to perform knowing they had only lost by 3 points the previous game against Palomar. Will was first to speak with confidence knowing they should do fine, feeling like a solid team without any problems, as did the other captains agreeing with “we straight, we good”. They said that #22 from Palomar was their biggest threat when asked if they had to pick anyone as their biggest competition for the night. From what was seen throughout the game he was quick for setting up the shooters and those driving into the bucket from outside the paint. But when asked if there was anyone from Palomar’s team that would make them nervous about losing, again with confidence a quick response this time from CJ “most definitely not, there has never been a team or player that could make them nervous coming onto the court for competition”.

With the season coming to an end soon, Coach Nicholas was asked if there was anyone interested in joining the team next season how would someone go about joining the team or at least being considered to come out for tryouts. He replied that there’s a summer basketball class that we Mesa Olympians can sign up for that they then hold tryouts for after and that is basically how they do their recruiting. So if anyone was ever interested in joining that summer class, that would be the first step to take with the hopes of playing basketball for Mesa College. Make sure to stay tuned for their upcoming games and make sure to go out and support your fellow Olympians.

Here at The Mesa Press, we want to foster a community for civil discussions. We welcome your insight and perspective. Comments posted must be appropriate for all ages. Any profanity or cursing is prohibited. That includes any attempts to curse with special characters (!@#) or spacing. Discuss and criticize ideas. We don’t allow comments that intend to intimidate, demean or harass other readers in any way.
All The Mesa Press Picks Reader Picks Sort: Newest